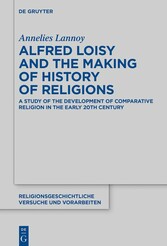 This monograph studies the professionalization of History of religions as an academic discipline in late 19th and early 20th century France and Europe. Its common thread is the work of the French Modernist priest and later Professor of History of religions at the Collège de France, Alfred Loisy (1857-1940), who participated in many of the most topical debates among French and international historians of religions.
Unlike his well-studied Modernist theology, Loisy's writings on comparative religion, and his rich interactions with famous scholars like F. Cumont, M. Mauss, or J.G. Frazer, remain largely unknown. This monograph is the first to paint a comprehensive picture of his career as a historian of religions before and after his excommunication in 1908.
Through a contextual analysis of publications by Loisy and contemporaries, and a large corpus of private correspondence, it illuminates the scientification of the discipline between 1890-1920, and its deep entanglement with religion, politics, and society. Particular attention is also given to the role of national and transnational scholarly networks, and the way they controlled the theoretical and institutional frameworks for studying the history of religions.